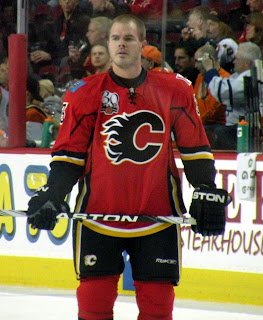 I've put together a statistical summary of all the former Toronto Maple Leaf players and draft picks who played in the NHL in 2009-10. To qualify for this list, each player must've either played at least 1 game with the Maple Leafs previously in their career or been selected by them in the entry draft. There are several who were drafted by Toronto but never played a game as a Leaf: Brad Boyes, Shawn Thornton, and Tuukka Rask.

- All ages are prior to July 1, 2010 (start of free agency).
- Forwards and Defencemen are sorted by Point-per-Game average (Pt/GP), while Goalies are sorted by Save Percentage (SVP).
- Skaters who played 27 games or more and 26 games or less are grouped separately.
- Explanations for some of the stat abbreviations: PPP - Power-play Points, SA/60 - Shots against per 60 Minutes, ESVP - Even-Strength Save Percentage, PSVP - Save Percentage against Opponents' Power-Play.
- If I've made any errors or omissions, feel to free to make a comment on it.

Former collegiate prospect Robbie Earl scored 6 goals with the Minnesota Wild without recording an assist this season. With this feat, Earl tied Tiger Williams for 2nd in a unique post-WWII era* NHL record; most goals scored without an assist in a single season.

* - when the average number of assists awarded per goal started trending up towards modern day standards.
Posted by Slava at 3:51 PM