Here are the Even-Strength Scoring Chances for the Toronto Maple Leafs of 2009-10 (missing data for games 2-5, 69, and 76), with separate tables for Forwards, Defencemen, and Goalies. 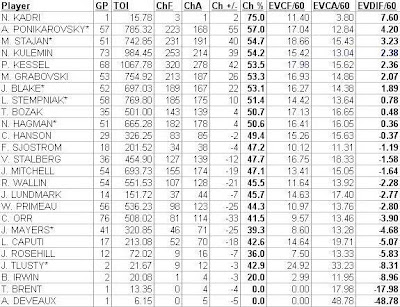 - It's nice to see Nazem Kadri leading all forwards, no? ;-)
- Ponikarovsky and Stajan had two of the best scoring chance differentials on the team before being shipped off to other teams late in the season.
- Of those who played out the season with the team, Kulemin led with a 2.38 DIF/60, ever-so-slightly better than Kessel, and had the lowest rate of Chances Against per 60 at 13.04. Bozak acquitted himself fairly well for a rookie, and the trio of Kulemin-Bozak-Kessel wasn't much worse than the line of Poni-Stajan-Kessel.
- Caputi showed some nice things after joining the team but at the end of the day was overmatched. He may need a little more time in the AHL.
- Checking liners like Primeau, Wallin, and Mayers struggled.
- Mike Komisarek, usually paired with Tomas Kaberle before his injury, led the defence.
- Jeff Finger had a terrible year any way you look at it.
- I was surprised to see where Gunnarsson ranked; an eyelash worse than Garnet Exelby. Does that actually mean he had as bad of a year as Exelby did? Not really, because the level of competition those two played against heavily contrasted. According to Behind-the-Net, Gunnar played against the toughs; usually with Francois Beauchemin, but he would also take shifts with other defenders on the fly, quite a role for a young rookie. Exelby, on the other hand, was used sparingly as the #6 man and played against the weakest opposition by far. Context is everything.
- Also, despite having the 2nd lowest DIF/60 among TOR defencemen while going up against heavy competition, Gunnarsson survived it as he wound up leading the team in plus/minus at +8.

It sure is nice to finally see the results of my work on this project... perhaps a few more scoring chance breakdowns will be posted here within a little while, I shall at least do a post on scoring chances by forward lines and defensive pairings.
Posted by Slava at 9:00 PM