2009-10 Scoring Chances on the Penalty-Kill, by Individual

Yesterday, I put up the chance statistics for the Leafs on the Power-Play. I was going to include the PK stats in that same post but for some reason the tables went screwy on me so I took the PK table out. Instead, I'll post that data here in JPEG form for skaters and goalies (click to read full-size).

Sjostrom and Phaneuf were solid additions to the PK, which saw a great improvement later in the season. The improvement was due to a combination of sending out a goalie who struggled mightily on the PK in exchange for one who caught fire (Giguere), and player personnel changes within the last one-third of the season with the bulk of icetime going to Sjostrom, Mitchell, Wallin, Hanson, Bozak at the forward positions. 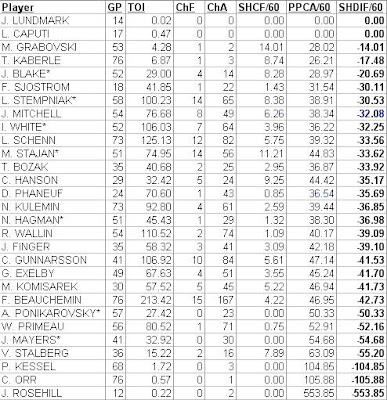