NHL Equivalencies for the Marlies of 2009-10 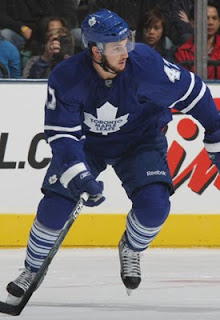 Last week, I took a look at the Toronto Maple Leafs' overseas prospects and projected how they would score at the NHL level, using Gabe Desjardins NHL Equivalencies. Now we cross over to North America to review the Leafs' prospects (and, I suppose, pseudo-prospects), in the AHL. It's certainly more names here than on the Euro list, however, practically all the noteables went on to play with the Maple Leafs or played the majority of the season in junior and then joined the Marlies after their teams were eliminated from the playoff picture. In Dale Mitchell's case, he was sent back to the OHL after 9 games at the beginning of the season.

Toronto shared their farm team with the Anaheim Ducks this past season and this led to a bit of disarray with the Marlies roster. The pugilistic Andre Deveaux led the team in scoring and the Marlies, like the parent Toronto club, had lackluster goaltending for a good chunk of the year (veteran Joey MacDonald put up a .893 save percentage over 36 games).

BTW, that's Darryl Boyce (born in Summerside, PEI) in the picture above, playing for the Maple Leafs during a preseason game. He played all of 3 minutes and 20 seconds in the NHL during a regular season game a few years ago before separating his shoulder on a hit. I also watched him play for the University of New Brunswick Varsity Reds as they won the CIS championship one year.

All players listed below are 26 or younger and on the Leafs reserve list or were junior players that they hold rights to. All ages are as of Jan. 1, 2010. NHLEs are Point-per-Game averages adjusted to the NHL level and /82 projects the amount of NHL points scored per 82 games. For the AHLers, I have adjusted NHLE's for age as well as league. 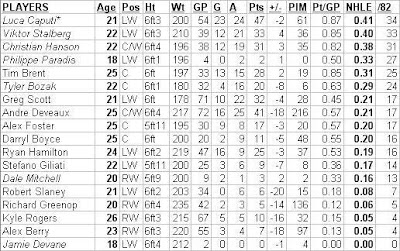 Stalberg and Caputi scored at similar rates in the NHL, only slightly less than what their NHLE's this year suggested. Christian Hanson scored at a lower rate in the NHL... with the Marlies, he scored 42 % of his points on the PP, but didn't score a single PP point with the Leafs. Bozak struggled with the Marlies and had to deal with a bout of swine flu during his time there along with an ankle injury.
Rookie AHLers (25+ games) were Greg Scott, Robert Slaney, Alex Berry, and Richard Greenop at forward, and Juraj Mikus and Keith Aulie on defence. Scott scored at an ever-so-slightly lower rate than he'd been project to out of the WHL (NHLE in his last junior season was 0.26, 21 points per 82 games) while Slaney and Berry were big disappointments. The latter two forwards spent some time in the ECHL as well.

I've also included shots-on-goal and PP data for each Marlie player. At least the AHL site now includes shots-on-goal data within their skater statistics page but it still takes some hunting to find out how many PP assists each player had.

* - Luca Caputi only played for the Wilkes-Barre Penguins in the AHL.
+ - Keith Aulie's statistics include those put up with both the Abbotsford Heat and the Toronto Marlies.
Posted by Slava at 5:00 PM

The following Marlies are up for free agency:

Left-winger Ryan Hamilton was re-signed today, according to capgeek.com

Meanwhile, the following players are set to join the pro ranks full-time next year: