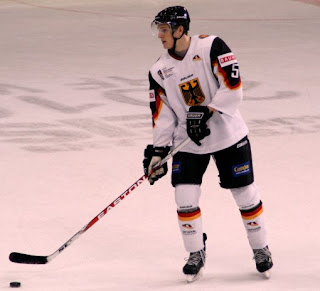 Korbinian Holzer, defenceman for the DEG Metro Stars of the Deutsche Eishockey League (DEL, the top professional league in Germany) these past three years, signed a two-year, two-way contract with the Toronto Maple Leafs organization today. Pension Plan Puppets has details on the signing, and more links to peruse if you want to get the low-down on this prospect.

Holzer was selected in the 4th round of the 2006 Entry Draft, taken with the 111th pick overall. The now 22 year-old defenceman has had a fairly noteworthy season, posting career-high numbers in the German league and earned a spot on the German national team at the 2010 Winter Olympic games. The Leafs brought over defencemen Carl Gunnarsson and Juraj Mikus last fall, and now the German blueliner, too, will cross the Atlantic ocean for the 2010-11 season.

Holzer was one of four European Leafs' prospects in the system. The tables posted further down in this article displays their statistics from this past season in their respective pro hockey leagues, including their NHL Equivalencies, a projection of the points they would produce in the NHL. Once again, I shall point out that we are indebted to Gabriel Desjardins of Behind-the-Net for his work in coming up with these league translations. I had once tried to cook up a magic number myself that estimates how AHLers would produce when called up to the big league, back in either 2002 or 2003 when minor-league vet Paul Healey had a favourable stint with the Leafs (he even got some icetime with Mats Sundin, as just about anyone who laced a pair of skates in Toronto did during the Pat Quinn era). I only looked at a few handfuls of players and concluded that AHLers produced anywhere between 30 to 70 % of their minor-league production at the NHL level depending on age. Of course, Desjardins' study drew from a lot more players than I did...

The NHLE's are valuable for helping shed light on what we should expect from our prospects offensively, and although there are limitations to the method, they have proved fairly accurate for the Leaf players who've jumped into the NHL the past few years as my previous article at this blog demonstrates.

The NHLE column shows the point-per-game projection at the NHL level for each player, and the /82 column is simply projected NHL points per 82 games.

Holzer is projected to score 18 points if he plays the entire season with the Leafs. In comparison, Carl Gunnarsson was projected to score 20 points (per 82 games) in his last season overseas and this year, having made the big-time, was on pace to score 29.
The pesty Leo Komarov has one more year on his KHL contract as does his teammate Dmitri Vorobiev (who, in the past, has shown little interest in coming over). Vorobiev, who once looked like the Leafs best Euro prospect, saw his production drop sharply along with his icetime as he played behind former NHLers Alex Zhitnik, Danny Markov, and Karl Rachunek. Jerome Flaake had a bit of a setback too.

The supplemental stats table shows additional numbers that may be of interest.

The KHL also publishes faceoff data. Komarov took 307 faceoffs over the season (5th most on Dynamo Moscow) and won 51.8 percent of them.
Posted by Slava at 5:00 PM